You’re lying on a psychiatrist's couch. As you tilt your head back, what do you see? Freud? Your mother? A rorschach like Matthu’s? The www.ishotkatemoss.com collage? Maybe just kate? I mean, she is everywhere and has infiltrated all other aspects of our consciousness, so why not?
When faced with such a question, there is only one person to turn to, Saul Robbins. While Saul has exhibited and has published widely, he is best known for the series Initial Intake, which examined the empty chairs of Manhattan-based psychotherapy professionals from their clients’ perspective, referencing viewers perceptions, associations, and responses to this particular environment and the work that takes place there. In 2012, Robbins created How Can I Help? - An Artful Dialogue, inviting passersby to speak with himself and other artists about anything they wished, for free and in complete confidence, in a pop-up office/exhibition environment in Midtown Manhattan. Saul's immediate family is made up of psychotherapists and he has stated that "this work stems from the belief that long-term challenges can be resolved by examining patterns in personal and familial history".
As Saul is interested in the way people interact within their surroundings, and the psychological dynamics, particularly of intimacy, I thought he should become acquainted with, and closer to, kate.

iskm: Let's analyze you Saul! What prompted you to create Initial Intake?
Saul Robbins (SR): Over the last decade my work has become increasingly motivated by personal experience and on multiple levels, references to loss and unity. With Initial Intake I observed and then photographed each chair from the client's vantage point so that I could best reference the perceptions, associations, and responses to this very private environment, and the work that takes place there.

iskm: Why?
SR: For many, the role of the psychotherapist holds significant weight, and the importance given to him/her is one of profound influence in many of our lives. Viewers are encouraged to consider the inherent personality in each of these environments, and the place of power being held, quite literally, across from them, on a regular basis.

iskm: So, how does this relate to your photography?
SR: About 3 years ago I started drawing and scratching into the 'Where's My Happy Ending?' prints which allowed me to better express myself emotionally and physically in relation to the series. The drawings are my immediate and visceral response to a very personal struggle in my life, which is the desire and struggles of my wife and I to start our family, with greater emphasis on mapping my own personal interior landscape rather than exploring the exterior one of 'Initial Intake'. Saving the remnants from the drawings memorializes these remains and the drawing process itself, attempting to retain a sense of wholeness and integrity within the context and subject of the series. I began scratching directly into Chromogenic paper and prints because I was dissatisfied with the way that Sharpie pens were settling on most of the photographs. The intentions of this practice are myriad: decorative, meditative, intentional, and metaphorical. The practice allows me to try and right what’s wrong in my universe rather than accepting or being limited to what is recorded on film and onto the paper. When I began scratching, saving the remnants was a natural extension of my interest in loss and unity; presenting each drawing with its jar of remnants also allows the images to retain the sense and quality of holistic integrity.

iskm: And you used this framework for your kate image?
SR: Yes. I shot and have now shredded all evidence of Kate Moss. She's now stuffed safely away in a small glass bottle in my living room.
iskm: Wait, really? Let’s see it! 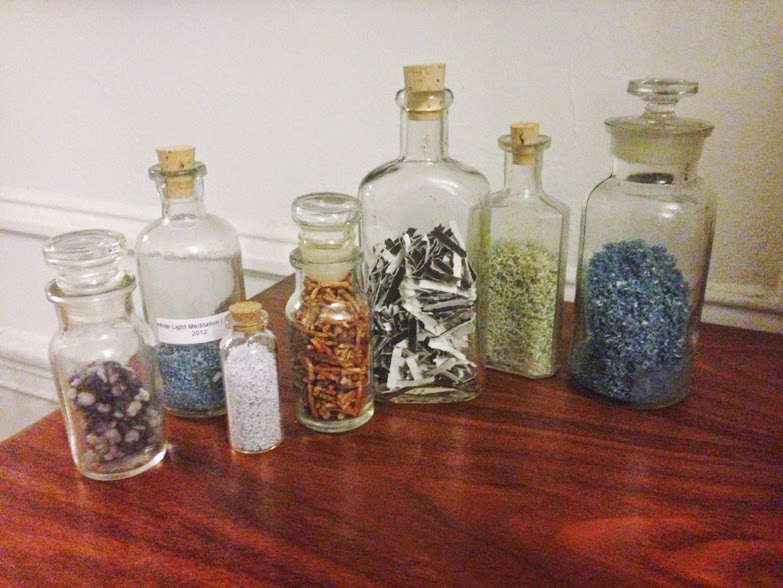 SR: Here she is in my collection of some other shredded and collectible objects, in case you don't believe I am actually so obsessive.

iskm: How did you find kate and explain to us what happened?
SR: I was at an event with my wife at the Soho Grand and saw this huge photograph above the bar. After I confirmed it was Kate. I made a picture with my wife’s mobile, printed it out at home and put it through our shredder, then put the remnants of that into the glass bottle. I then took a black & white photograph of the bottle to give kate a classic look.

iskm: How do you feel your approach to photography affected your submission to ishotkatemoss?
SR: I don’t care much for star worship but relish the idea of capturing and “shredding" Kate, then bottling her up as a humorous way to play off ideas of branding, commodification, star culture, and ownership. Why should kate and her peers be the only ones to bottle a perfume for us to covet? If it weren’t for the fans, these stars would remain unknown, and I am interested in turning this equation on its head with my own exclusive brand of kate moss ... perhaps I should call it “Kate, by Saul - the exclusive edition".

iskm: I think that this image is one of the most distinctive submissions that we have added to the iskm collage. Finally, which photographer/s would you most want to most see involved in ishotkatemoss?
SR: How about David Hammons, Carrie Mae Weems, Glenn Ligon, Mickalene Thomas, Wangechi Mutu, or Clifford Owens? And, while he is no longer with us, how about Robert Heinecken? I’d love to see him take on iskm.

iskm: Thanks Saul!
SR: Thank you for inviting me to participate.

Saul is currently part of an exhibition at NOPA. the New Orleans Photo Alliance, which runs until May 25th. For information about this, upcoming exhibitions and his work you can visit www.saulrobbins.com.

And like Saul, and all psychiatrists in NY do ... Observe. Slow Down. Shoot. Submit.
www.ishotkatemoss.com

Posted by ishotkatemoss at Sunday, May 18, 2014
Email ThisBlogThis!Share to TwitterShare to FacebookShare to Pinterest